With inspiration from our traditional ritual and stories, (the elephant Meruprabha showing compassion in the midst of a forest fire above) and the undeniable science of the climate crisis, drJina wrote a non traditional climate focused pratikraman for adults. Below is a link to the pdf for the text of the pratikraman. drJina read from this version on Clubhouse on Sept 11, 2021. Here is the audio recording of the Clubhouse event.

Please read the Jain Declaration on the Climate Crisis, and endose and enter your pledge(s) there.

So many Jains in so many places have started to recognize the violence inherent in dairy and are incorporating this information into their practices for Paryushan, our most important community observance. A new group on Clubhouse called the Jain Vegan Initiative has brought new energy to the cause. There is a daily paryushan support group. Also, members compiled a Jain vegan cookbook in record speed, which may be updated.

And pinkispalate.com has some advice for paryushan and a dosa recipe for those who are not fasting.

Caution: If you are fasting, the resources above may tempt you to eat!

Today a special English pratrikraman for kids included a recognition that consuming dairy and other animal products constitute himsa, and they also included a vow related to decreasing their carbon footprint.

The Applied Jainism group has a climate initiative oriented app that includes using only vegan and eco friendly cosmetics, not wearing silk and not wearing leather. My suggested next step– add eating only vegan food!

More images from the Jain vegan initiative are available, if you keep reading. Thumbnails are first and then a slide show with larger images follows.

END_OF_DOCUMENT_TOKEN_TO_BE_REPLACED

Consider how to help the earth this Paryushan

We have just posted the Jain declaration on the climate crisis as a new page. Please read and consider it and on this day of Samvatsari for Svetambar Jains, consider if you’d like to endorse it and make any commitments. There is an endorse button at the top of the page. Above for illustrative purposes only. This is not the pledge associated with the Jain declaration.

Sailesh Rao of Climate Healers places our going vegan as the #1 thing we can do for the plant.

The book Drawdown and its associated website gives details of solutions in all different sectors.

My co-author, Sudhanshu, also describes the top 8 items you can do to address the climate crisis. END_OF_DOCUMENT_TOKEN_TO_BE_REPLACED

Petition to end the Use of Dairy in Jain temples: A Pre-paryushan plea by Nirva

Paryushan and Das Lakshan parva are just around the corner. Starting on Friday, September 6th, Jains all over the world will increase their level of spiritual intensity.

My childhood Jain Centers included Norwood, Massachusetts and Houston, Texas. I now live in Massachusetts with my husband and four children and have been practicing veganism (food, clothing, even my car is leather-free) for 2 years. Last year, I attended a lecture in Mumbai where a Jain marajsaheb spoke to us about the dairy industry as it applies to Jainism. It inspired me to reach out to all of you.

As you may know, the Jain Center of Southern California  decided this year not to allow dairy in the temple due to the incredible suffering animals go through in order to produce ghee/milk, etc. They made an inspirational video which is worth watching;

Unfortunately, many other Jain centers today still use dairy products (whether it is ghee in pooja or food served). In our private homes we must respect a person’s wish to do as he/she pleases. However, our Jain center is shared by a community of people seeking to observe and follow Jainism, and more specifically ahimsa. In order to follow ahimsa to the highest level, I ask that you observe a non-dairy practice for 18 days (September 6 – September 23).  In addition to your individual practice, please sign a petition to end the use of dairy products in our Jain temples. This will magnify your good personal choices so that we can do better as a community.

END_OF_DOCUMENT_TOKEN_TO_BE_REPLACED

Fasting talk from JAINA 2017, just in time for Paryushan

I gave a 50 minute talk at JAINA on scientific aspects of fasting and Jainism. Rather than have one long video, I’ve divided it into shorter segments below.

Here are the videos in order:


Here are the slides: Water fasting intermittent fasting and Jainism. For further reference, here are some additional links END_OF_DOCUMENT_TOKEN_TO_BE_REPLACED

Why should a Jain renounce milk for Paryushan and Das Laxan? 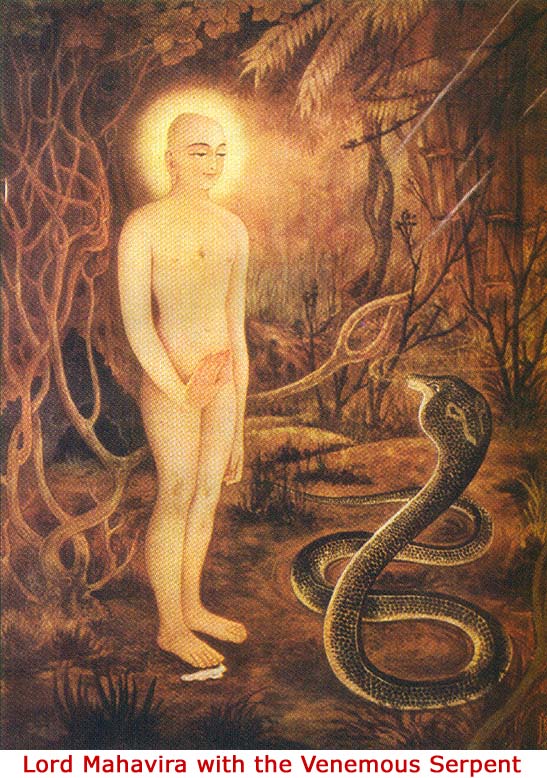 This photo depicts the story of Lord Mahavira meeting the angry serpent Chandakaushik whom he met while meditating in the forest. He is so filled with compassion that he does not harm the snake. When the snake bites him, milk issues forth from his foot. He is as filled with love for the snake as a mother is for her child.

One should not injure, subjugate, enslave, torture, or kill any living being including animals, plants, or insects — Respect for all living beings is Non-Violence. – Ächäränga Sutra – Bhagawän Mahãvira

There are five acts or deeds, which should be known and avoided. They are:
• Tying animals where it could hurt them, or putting them in cages where there is no freedom
• Beating them with sticks or any other means
• Piercing their nose, ear, or amputating limbs or any part of the body
• Making them carry a heavy load
• Depriving them of food and shelter
–Pratikraman Sutra, Lesson 7 on Non-violence

As Jains we have abstained from meat and eggs for thousands of years. Our practice of ahimsa has lacto-vegetarianism as a moral baseline.
So now, why vegan? Here we’ll cover the hinsa involved in milk products. We’ll do a separate post on eggs. On a Jain site, we hope we don’t have to explain what’s wrong with meat!

We can read the words as they’ve been passed down through Lord Mahavir’s  disciples and consider in modern times, would Lord Mahavir have told us it is OK to consume milk? Consider this question as you read the facts.

A cow raised for her milk is forcefully impregnated yearly, and her babies are taken away within few days. She is either pregnant or lactating 9 or 10 months out of every year only to have the cycle repeat once she gives birth.
Certain amounts of pus and blood are legally permissible in milk. We use this milk in pujä and other ritual.
Dairy cows are no longer vegetarian. Along with grains, they are fed unnatural, high-protein diets – which include dead chickens, pigs, and other animals.
Using powerful hormones, the cows are forced to produce 6 to 8 times as much milk as they naturally would. Also in spite of heavy use of antibiotics, these animals develop mastitis, open wounds and other infections.
A cow’s natural lifespan is about 20 years, but cows used by the dairy industry are slaughtered after only 4 or 5 years, and their meat turned into pet food or hamburgers. Or in India, their meat is exported.

Nearly every adult cow around 5 years of age and almost every male baby cow will be shipped to a slaughterhouse and killed. When transported in hot weather, many cows collapse in the heat; in the cold, cows can freeze to the sides of the truck until workers pry them off with crowbars. Cows are shot in the head with a steel bolt gun meant to stun them, but often this fails to render them insensible to pain. Dairy cows may be conscious when they are shackled, hoisted, and cut. END_OF_DOCUMENT_TOKEN_TO_BE_REPLACED 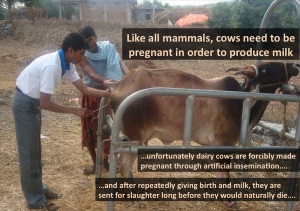 The Jain Vegans Working Group issue a compelling plea based on the suffering and death involved in dairy product consumption. Please give up dairy products during this time that Jains traditionally fast, introspect, repent for past misdeeds, and make vows for spiritual purification.

Paryushan, the Jain festival of penance and forgiveness will begin very soon. During the festival, followers of the Jain faith traditionally fast, repent, and forgive. For lay members, fasting often entails avoiding activities that are traditionally thought to cause more himsa than others, such as eating root vegetables or eating after sunset.

As someone who has come across the activities of the Jain Vegans Working Group, you will be aware of how our consumption of dairy (organic or conventional) leads to the immense suffering and murder of innocent cows.

In light of all this, it seems reasonable that during Paryushan we as Jains should acknowledge and reflect on the suffering we have imposed on cows as a result of our consumption of dairy products.

Paryushan offers a perfect time to reflect on the actions we undertake in our daily lives and to make changes to our dietary habits.  So, in addition to the other activities you undertake, why not consider giving up dairy products this Paryushan

Pravin uncle of the JAINA education committee in the US gave compelling talks in the UK this Paryushan about the hinsa involved in dairy production, among many other topics. See the audio and video files put together by Rajesh and Jyoti, of the Kanji Swami Jain community in their encyclopedic site here

As part of the paryushan program at JCNC, Shilpa and Keyur discuss their journey to veganism during paryushan for reasons of nonviolence  and elaborate the benefits to their health and those of their children. Keyur lost weight, Shilpa reversed an early tendency to diabetes, and the children have avoided ear infections. They’re clearly full of energy, growing and thriving on a fully vegan diet. Keyur makes the point that the very same approaches they use to explain to the   children why they vegan are important for those parents raising their children vegan.

JAINA Education Leader Pravin Shah was recorded this week while in London, where he was invited to give talks for Paryushan. Here we have two talks in English and one in Gujarati on his personal decision to become vegan after visiting a dairy farm and discusses the decrease in his cholesterol that resulted. He also sicusses the philosophical basis for veganism in Jain philosophy and practice. One is “parapagraho jivanam“, all life is interdependent, and the other enjoins the practitioner to consume only those items known to him or her to be ahimsak. Thanks to Minal, Mahersh, Nishma, and Sagar from the JAIN vegans UK for producing these recordings!
1. Profile  (Gujarati) – http://youtu.be/4ZJHbtgkIj0
2. Profile (English): http://youtu.be/sEgBMc9-9QM
3. Interview (English): http://youtu.be/UcyVVJAByio