From “Earthlings” to Ahimsa, An American Journey to Jainism

I was born in the state of North Carolina in the US. Every meal I had up until about four years ago had body parts, animal secretions or both in them. This is still seen as normal, especially in the south of the
country. You see, in the south, there is a whole culture, one where people proudly display stickers andlicense plates on their cars and trucks with pictures of happy pigs along with the word “barbeque”.
There are billboards on the sides of roads advertising things like steak, cheeseburgers, chicken, tacos, fish, milkshakes… On and on it goes, billboard after billboard after billboard, all of them screaming out to
us, “In the name of our profits and your desires, participate in this violence!”. The same message over and over again one after the other. Not only do we have billboards screaming these messages at us, but,
for some reason, the advertisers seem to think the more body parts and secretions they put between two slices of bread, the better these things they are advertising will be to those that consume them. In actuality, there is a culture of more (more violence/more harm) equals better, and many restaurants in the country are cashing in because of it.

About four years ago I went vegan. Why? I saw footage from a
film called “Earthlings”. This film is not for the faint of heart, as it dives deep into the dark details,showing us what goes on in the hidden places that the meat industry, dairy industry, and fishing industry
need to thrive. By the way, a little sidenote here about the dairy industry, something that is important to know: the meat industry and dairy industry are tied together, not exactly two separate industries as
many seem to think, they are pretty much one and the same. More here on that.

Now, back to the film… What changed my heart, the thing that went deep into me, was seeing a cow in a slaughter chute on her way into the area of the slaughterhouse where they put a bolt through her skull. Can you
imagine the fear she was experiencing, the trauma? I couldn’t help but think of the smells, the sounds, the things she saw, what was happening inside her mind and body because of all this. I didn’t know what
to do with what I was deeply experiencing due to this, so I did the only thing I knew to do, I paced the floor. Back and forth. Back and forth. Back and forth. My whole body felt like it was quaking. That day I
made the decision to never participate in any of these things again, and I never did. Fast forward to the year 2020. This is where Jainism enters the picture.

END_OF_DOCUMENT_TOKEN_TO_BE_REPLACED

In the past, we posted a Youtube Video of a Digambar muni who recognized the violence in dairy production and consumption. Now the Svetamabar tradition is represented! This maharaj saheb gives a very inspiring talk about how our Tirthankars and disciples did drink milk in small quantities as medicine and even broke fasts with kheer, but how our current consumption of milk by the glassful is cruel and unhealthy. He encourages the audience to go vegan for 3 months, no excuses, no substitues, and to include non dietary aspects too. He has been vegan for 6 years and has noticed a difference in his way of thinking.
Please click the continue reading button to read the full English translation, thanks to Pranav Mehta. Labdhi Sagar Maharaj Saheb has quite a charismatic speaking style, and those of you that understand Gujarati can enjoy it!

END_OF_DOCUMENT_TOKEN_TO_BE_REPLACED

Today we met Sunny Gurnani at the Oakland VegFest. Sunny is the founder of GoVegan.in, a company in India that sells organic soy-milk, tofu and ice-cream. While we were in Ahmedabad last year we regularly got soy-milk from them (see the next post about it.

Here is a picture of the assorted of Soy Milk we purchased from them in Ahmedabad. 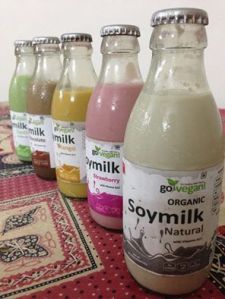 I interviewed my parents’ physician who has been practicing internal medicine for 27 years. Raised Jain and having learned more about the hinsa of dairy, after his patient brought him Diet for a New America, he decided to become completely vegan. He has  been observing and especially in the last 6-8 months,  promoting the health benefits of a vegan diet including weight loss and decreased cholesterol. He has collected data on 50-60 patients showing that veganism has resulted in a 50% drop in LDL levels among omnivores and 10-30% drop among previous vegetarians, beating the effect of the widely prescribed statin drugs. Dr. Shrenik also shares his observations regarding patients’ willingness to change especially among young and prediabetic patients.

Mahersh and Nishma recorded a  fellow UK based Jain Vegan group member, Keval, at the VegFest in Bristol, UK. Keval discusses his journey with brevity, sincerity and clarity, a winning combination.

Profiles of Vegan Jains: Mahersh and Nishma (and a shrikhand recipe!)

Mahersh and Nishma started the group Jain Vegans based in the UK.  They invite  us to their home in London for breakfast to discuss their reasons for going vegan and show us the variety of plant milks and other tasty foods they enjoy. To make the shrikhand that Nishma tastes in the video:

Use unflavoured soya yoghurt (400g)  and place a muslin (“cheese”) cloth over double fold bath towels and spread the soya yoghurt (left it for appx 2hrs).  When the water has been absorbed, remove the yoghurt solid from the muslin cloth and place the lumps in a bowl. Mix in sweetener (tradtionally sugar, but find a vegan kind) to taste, powdered cardamom and a generous pinch of saffron. And garnish with almonds and pistachios.

Professor Gary Francione is undertaking a fast from July 4-7, 2013 to express his conviction that consumption of dairy and is incompatible with our Jain ideal of ahimsa and distress that the JAINA convention will serve dairy products. He explains below:

I will not be attending the JAINA convention this year. But I will be fasting for the entire four days of the Convention to express my concern that the Convention will be serving food that involves himsa, such as milk, ghee, paneer, and ice cream. It is clear that the intentional infliction of suffering and death on mobile, multi-sensed beings is a violation of the principle of ahimsa, and it cannot be doubted that, as a matter of simple fact, there is a great deal of suffering and death involved in the production of these foods. Animal foods also involve stealing from animals and the rape of female animals.

Please understand that my fast is not an act of protest. It is an expression of profound sadness that at the largest gathering of Jains in North America, there will be himsa as part of the celebration. And for what? For nothing more compelling than palate pleasure.

I have spoken with the incoming leadership of JAINA and I have been assured that this issue will receive great scrutiny in the coming years. I look forward to that and I will assist in any way that I can.

I know that the Jain community loves Gurudev Chitrabhanu. It is my hope that Gurudev lives to see the organization he helped to create embrace a principle that he holds close to him as an integral and necessary part of ahimsa. During the fast, I will meditate for at least two hours per day on the wise words of Gurudev Chitrabhanu in his plea for Jains to reject all animal animal foods.

I invite any of you who are interested to read this short essay that I wrote several years ago on this topic and that was published in the Jain Digest. It can be found here: http://www.abolitionistapproach.com/media/pdf/Ahimsa.pdf

For more on Prof. Francione’s thoughts about Jainism and Veganism, you can hear an interview we did in his office in Newark, NJ in June 2013 for the Eco-Vegan Booth at the JAINA conference.

I had the opportunity to interview Sanjay Jain, who is leading the Eco-Vegan booth project at the upcoming JAINA convention, when he visited San Francisco in March. Hear his story below.

“These selfish acts perpetrated by human beings, due to their greed, result in the following three consequences:

1. When we take the milk which belongs to the off-spring of the cow, the suffering vibrations of the cow and the calf would boomerang on us and might create some separation in our lives.  As we plant the pain in others, the vibrations received would result, as a ‘karmic’ consequence, into separation from our dear ones.

2. The cow’s normal life span is twenty-five years.  Humans reduce this longevity by slaughter or use in veal industry.  The ‘karma’ of taking away the longevity of a living being influences our life span and results in reduction of our own life span or of our dear ones.  Also the end of the life may not be natural and it may be by accident or some permanent disability may take place.

3. We snatch away or steal the off-spring from the cow, as well as its milk for the calf.  The milk and the child are taken away ruthlessly by us without the permission of the cow.  This is ‘adattā dān’.  This is a charity not done by the donor.  It is acquisition of someone’s belongings without consent.  One should therefore be ready to face consequences of losing one’s own property, wealth or dear ones.

As Bhagwan Mahavir had said, ‘Non-violence and kindness to living beings is kindness to oneself.  For thereby one’s own self is saved from various kinds of sins and resultant sufferings and is able to secure his own welfare. ‘    ”

In the words of a 4,7 and 9 year old (with their loving parents behind the camera), why, if you love animals, you should be vegan.
And how you can still enjoy mint chocolate chip soy ice cream cones and vegan shakes!

Posted on June 23, 2013 by drjina in Environmental, Profiles, Vegan Booth