Easier than ever to eat yummy vegan food in India 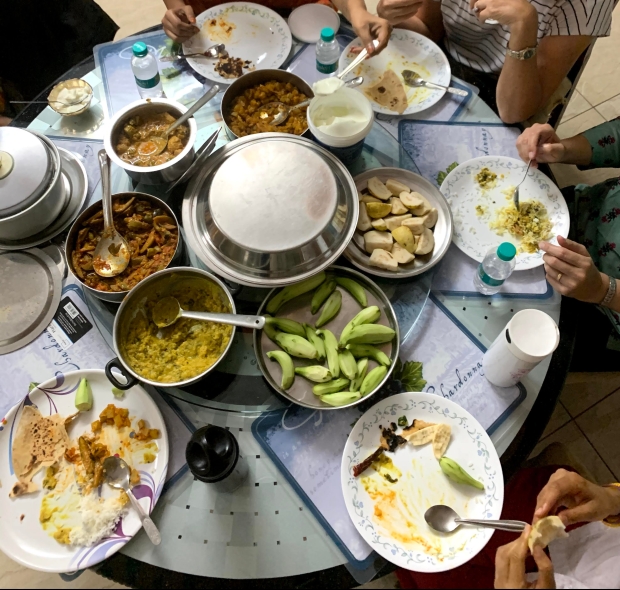 Vegan Jains went to India in November 2019 for a trip that combined medical care volunteering near Hyderabad, visiting a palliative care organization in Trivandram, visiting tourist sites up the Kerala coast, including the Mata Amritamaya Ashram, and then visiting family in Mumbai. From the traditional vegetarian food which had plenty of vegan options to unique vegan restaurants, to hotel breakfasts and specialties made by family, we found that those who catered to travelers had all heard of the word vegan, family was accustomed to preparing food vegan,  and the level of spice and oil, as well as food safety when eating out were bigger concerns than veganism.

We flew Air India on the way and were pretty disappointed by the bland food on the  long transpacific flight. However, I was delighted when upgraded to first class on the Delhi-Hyd leg AND, they had extra vegan meals so i could eat a nice Indian dinner. Arriving at the Novotel airport hotel, the breakfast buffet offered temptations that flew right in the face of eating with restraint! Made to order split mung crepes,  called pesarattu, as well as the more usual south Indian specialities of idli and dosa, as well as North indian breads such as cauliflower parathas along with fruit and nut loaded oatmeal, toast with vegan bread, soymilk and juice and all manner of international dishes left me full for the day.

Eating with our fellow volunteers in  rural districts around Hyderabad, we were able to avoid the yogurt (curd in India) ladled up by our colleague in the photo at the top, and still enjoy the dal, squash,mixed veg curry, chappati, rice and peeled cucumbers. There was a whole article on how Hyderabad was voted the most vegan friendly city in India and at the end of the trip we got to go to Smar Alec’s, an all vegan restaurant.

Then we moved on to Kerala where the veg thali came with their special rice, papadum, sambhar, rasam, veg curries and pickles. 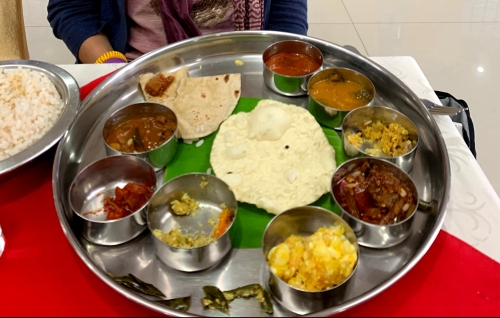 In Kovalam, we ate at a restaurant that is about to become a bed and breakfast,  called Vegan Kitchen, and would consider staying there in the future.

We had a nice meal with drinks at somewhat fancy but not even vegetarian Farmer’s Cafe in Kochi one night, but even wandering around Kochi, hungry and thirsty at a standard decent restaurant attached to a hotel, we had delish bhindi made with coconut cream rather than dairy, as might have been in a Northern version of the dish, and chappati.

Breakfasts in Kerala offered steamed banana rice cakes at our bed and breakfast, rice flour- coconut pancakes kallappam   and the ever delicious and always vegan idli/dosa with sambhar, supplemented by the occasional cornflakes with fruit juice at business hotels. 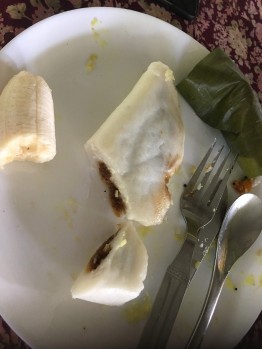 Above is masala dosa, sub banana for potato to make the already vegan dosa “Jain”.

The Amma ashram in Kerala had many vegan items, including pizza, ragi pancakes, pesto pasta, loaded salads (though a bit risky to eat anything raw in India) and vegan baked sweets in the Western cafe and plentiful south Indian veggy curry with rice on offer. Since all the work done at the ashram is done by volunteers, I especially appreciated the efforts of the community that made this possible. Apart from the food (which should not be the prime reason to visit an ashram) as a Jain, i did not identify with the Vedic devotional aspects of the practice, yet, I highly respected the eco-consciousness of Amma and her community and their work in relief and development.

While traveling we brought herbal tea bags to make our own tea, drank fruit juice and smoothies at restaurants, coconut water out of the shells and fortunately did not get sick.

Then we moved on to visit my relatives.

In Mumbai, while generous family treated us to meals, a small vegan restaurant called Earthlings, and a more expensive set of options at Sante Spa Cuisine, we also enjoyed food at home.

My  family in Mumbai now knows about vegan food, since I’ve been visiting them as a vegan for 30 years. They had traditional Gujarati breakfast items along with oatmeal and soymilk.  For lunch and dinner, one side of the family made a traditional Gujarati thali. Another made  a delicious “sizzler” with tofu, veggies, noodles, a vegan mayonnaise, beans and fries. I left off the potato fries and mushrooms for a strictly Jain (no root) vegan version.

The restaurants we visited including photos with food, are reviewed here:

Stay tuned for subsequent posts on the monkeys that we saw and a conversation with a Jain nun in  a temple complex in Kerala!

This entry was posted in Dairy in India. Bookmark the permalink.