Jain Society of Toronto celebrated Jeevdaya day on June 29. The event was organized by the Jeevdaya group an informal group set up to educate and involve Jain Community in compassion activities. There are several words to describe “compassion” in our tradition(Jeevdaya,Karuna,Pranatipat virman). This is fundamental to Jainism.

It was a whole day event. Dr. Tushar Mehta was the Master of Ceremonies for the event.It started with a presentation by Dr. Tushar Mehta on the health benefits of a plant based(vegan) diet.

Next, Sanjay Jain made an excellent presentation on Jeevdaya describing how his convictions grew over the years as he was confronted with choices. These choices led him to abstain from pearls, silk, leather, wool and eventually dairy. At every stage he was enthusiastically supported by his wife Prachi.Sanjay also arranged a display with ten posters and several models which described how current practices in food industry involve extreme cruelty. This was very well received.

Next, Rueben and his wife described how they brought up six children all brought up without dairy products.. Sight of six healthy children was enough to demolish the myth that children need milk for proper nutrition. Their daughter who is an activist at such a young age spoke about her activities.

Next Radhika described her own experiences. Her daughter Laxmi and her son Rohan narrated how they gave up dairy products when they realized the cruelty inherent in production. This was very inspiring indeed.

This was followed by the inauguration ceremony consisting of lighting a ceremonial lamp by Dr. Mahendra Mehta and by some young children.

Just before lunch, Ekta Jain from Waterloo treated the audience with a beautiful stavan.

Lunch with seven desserts was served. Needless to say that food was all plant based and Jain.

Afternoon started with Laughing Yoga by Shanti Parakh. This was followed by some short video presentations by Tushar. Healthy discussions followed with active participation from the audience. 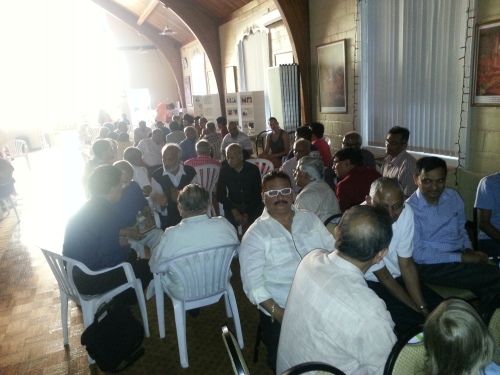 We then showed some movies about How dairy cows are abused, impregnated, slaughtered, and their babies are slaughtered. There was good discussion after the movie.Star speaker for the afternoon was Krista, executive Director at Mercy for Animals, Canada. She explained how MFA took on large companies and made them comply with laws on prevention of cruelty. She described how MFA undercover investigators discover many unsavory practices which when these come to light would rouse public anger. Her presentation was very powerful.

This was followed by a presentation by David Alexander and Barbi Lazarus on the activities of the Toronto Vegetarian Association(TVA). They described the activities of TVA which largely consist of promoting plant based lifestyle by explaining health and other benefits of plant based diet and by helping those who want to switch to plant based diets. They explained how this is consistent with Jain values which put great emphasis on saving lives.

Next, Radhika Subramanyan and Rueben … gave a report on the activities of two local Farm Sanctuaries(Wishing Well and Cedar Row).Farm Sanctuaries are modern versions of PANJARAPOLES which have an important place in Jain traditions.

Ambika Jain organized an activity table for children. It kept the little ones happy and busy throughout the day.

Finally, there was a lively panel discussion where all the presenters answered questions from the audience.The program concluded with tea and snacks including six desserts!

This entry was posted in Activism, Jain Philosophy. Bookmark the permalink.

One response to “Jeevdaya Day in Toronto”