Dallas teenagers articulate connections between veganism, reduction of methane and conservation of water 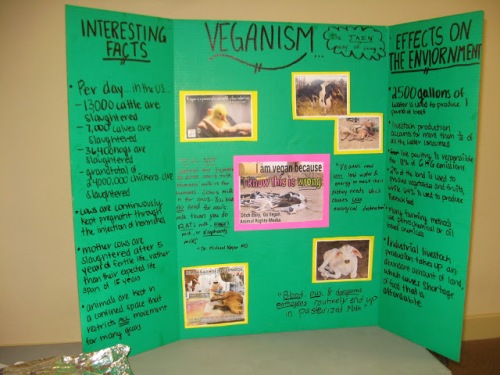 Not only does the dairy industry cause immense pain to the tortured animals like cows and chickens, but it also leads to a large amount of water consumption, land degradation, climate alterations, and gas emissions. While it only takes one acre of land to produce 40,000 lbs of cherries, potatoes, and other fruits and veggies, one acre of land can only produce 250 lbs of beef. At the same time, there is more land necessary to maintains animals rather than planting fruits and vegetables. 70% of water is used on farming and of that, the water that is used to clean waste is dumped into the ocean which pollutes the water and kills many sea creatures. From a Jain standpoint, the cows and chickens which produce milk or eggs receive horrible treatment and are forced to live in confined areas where they can’t even move. Most of the time these animals are beaten by the farmers and the cows are continuously kept pregnant to maintain milk production. The calves are then sent to slaughter houses. While many Indians may question the health aspect of becoming a vegan, it is proven that dairy products are not necessary for the survival of a human after the stage of a baby. There are many alternatives to dairy such as soy and almond milk, soy cheese, and various other products from whole foods or central market. By converting to veganism, you would be saving the environment as well as  shedding the karma that each soul acquires by encouraging the dairy industry.
– Shivani Daftary

METHANE
Methane is an odorless and colorless gas made by anaerobic bacteria on land and deep in the ocean. It is the 2nd most abundant greenhouse gas in the atmosphere second to CO2. Natural gas and petroleum systems are the largest source of CH4 emissions from industry in the United States. Domestic livestock such as cattle, sheep, and goats produce large amounts of CH4 as part of their normal digestive process. Methane is generated in landfills as waste decomposes and in the treatment of wastewater. Upgrading the equipment used to produce, store, and transport oil and gas can reduce many of the leaks that contribute to CH4 emissions. Methane can be reduced and captured by altering manure management strategies at livestock operations or animal feeding practices. Not eating foods that promote this industry to grow will also help. Emission controls that capture landfill CH4 are an effective reduction strategy. Also, reducing the amount of waste that you produce can decrease the size of landfills over the years.

Even though 75% of the earth’s surface is covered in water, only 2.5% of it is fresh and 2/3 of that it frozen. This makes water an extremely precious resource, something that many people fail to understand. A huge number of large rivers including the Colorado, Rio Grande, Ganges, and Nile are no so over tapped by humans that they discharge little to no water into the sea for months. In addition globally our water use has been growing at twice the rate of population growth in the last century and here in the United States, twice the global average is used. Over tapping also causes countless freshwater species to die and they are becoming extinct at twice the rate of saltwater species. Clearly, over using water is a huge crisis and measures must be taken in order conserve water. Vegetarianism is actually very beneficial in conserving water; livestock accounts for more than half of all the water consumed in the United States.

This entry was posted in Activism, Environmental. Bookmark the permalink.

2 responses to “Dallas teenagers articulate connections between veganism, reduction of methane and conservation of water”