It was a beautiful Thanksgiving Holiday weekend here in the Bay area, with a lot to be thankful for. This year the JAINA Executive Committee approved our new committee, the Ahimsak Eco-Vegan Committee. Many of us who have been vegan for a long time now have a formal structure supporting our initiatives. We just kicked off Jivdaya Day, as we’ve named Thanksgiving in our community with a campaign for a 30 day compassion challenge and are hoping centers around the US and Canada will initiate activities.  A lot of activities have already occurred!

Here in Berkeley, we offered Beyond Meat as a vegan option to a homeless shelter serving homeless teenagers on Nov 26. While the main cook, our friend who is vegetarian,  thought she should serve chicken, as she found that in the past they didn’t like tofu, she was open to trying something different.  We found that the kids were willing to try to Beyond Meat even though they did not care for the simply prepared tofu. The three local college students who served the food also discovered that the kids liked the veggie meat and when dishing out the late night plates for teenagers that came in late, put some of it on each of the plates.   Our friend the chef, the volunteers and I are pictured here in the opening of the kitchen where the kids were served.  Next Sunday we’ll cook a fully vegan meal  with chili, cornbread and gingerbread! 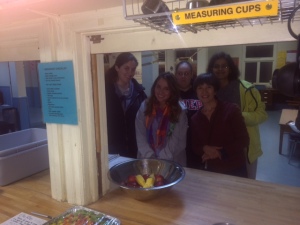 This entry was posted in Uncategorized. Bookmark the permalink.

Leave a Reply to Beyond Meat Cancel reply